Myth 3: Designing Forward and Reverse Primers to Have Matching Tm’s Is the Best Strategy to Optimize for PCR

Nearly all “experts” in PCR design would claim to believe in myth 3. Most current software packages base their design strategy on this myth. Some careful thought, however, quickly reveals the deficiencies of that approach. The Tm is the temperature at which half the primer strands are bound to target. This provides intuitive insight for very simple reactions, but it does not reveal the behavior (i.e., the amount of primer bound to target) at the annealing temperature. The PCR annealing temperature is typically chosen to be 10 C below the Tm . However, different primers have different H of binding, which results in different slopes at the Tm of the melting transition. Thus, the hybridization behavior at the Tm is not the same as the behavior at the annealing temperature. The quantity that is important for PCR design is the amount of primer bound to target at the annealing temperature. Obtaining equal primer binding requires that the solution of the equilibrium equations as discussed in Subheading 2.1. If the primers have an equal concentration of binding, then they will be equally extended by DNA polymerase, resulting in efficient amplification. This principle is illustrated in Fig. 5. The differences in primer binding are amplified with each cycle of PCR, thereby reducing the amplification efficiency and providing opportunity for artifacts to develop. The myth of designing forward and reverse primers with matched Tm’s is thus flawed. Nonetheless, as single-target PCR is fairly robust, such inaccuracies are somewhat tolerated, particularly if one allows for experimental optimization of the temperature cycling protocol for each PCR. In multiplex and other complex assays, however, the design flaws from matched Tm’s become crucial and lead to failure.

An additional problem with using two-state Tm’s for primer design is that they do not account for the rather typical case where target secondary structure competes with primer binding. Thus, the two-state approximation is typically invalid for PCR, and thus the two-state Tm is not directly related to the actual behavior in the PCR. The physical principle that does account for the effects of competing secondary structure, mishybridization, primer dimers, and so on is called “multi-state equilibrium,” as described in Subheading 2.4.

Below an alternative design strategy is suggested in which primers are carefully designed so that many PCRs can be made to work optimally at a single PCR condition, thereby enabling high-throughput PCR without the need

Fig. 5. Illustration of hybridization profiles of primers with two different design strategies. In the left panel, the Tm’s of primers are matched at 686C, but at the annealing temperature of 58C, primer B (squares) binds 87% and primer A (diamonds) binds 97%. This would lead to unequal hybridization and polymerase extension, thus reducing the efficiency of PCR. In the right panel, the G at 58C of the two primers is matched by redesigning primer B. The result is that both primers are now 97% bound, and thus optimal PCR efficiency would be observed. Notice that the Tm’s of the two primers are not equal in the right panel.

or temperature optimization. This robust strategy also lays the foundation for designing multiplex PCR with uniform amplification efficiency in which one must perform all the amplification reactions at the same temperature.

Application of the Multi-State Model to PCR Design

A typical single-stranded DNA target is not “random coil” nor do targets form a linear conformation as cartoons describing PCR often show (see Fig. 6). Instead, target DNA molecules (and also primers sometimes) form stable secondary structure (see Fig. 7). In the case of RNA targets, which are important for reverse-transcription PCR, the RNAs may be folded into secondary and tertiary structures that are much more stable than a typical random DNA sequence. If the primer is designed to bind to a region of the target DNA

Fig. 6. The two-state model for duplex hybridization. The single-stranded target and probe DNAs are assumed to be in the random coil conformation. 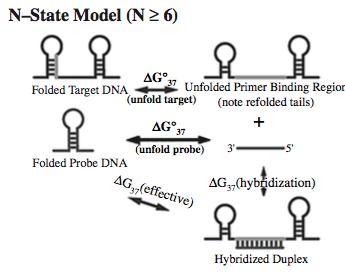 Fig. 7. The multi-state model for the coupled equilibrium involved in DNA hybridization. Most software only calculates the two-state thermodynamics (vertical transition). The competing target and primer structures, however, significantly affect the effective thermodynamics (diagonal transition). Note that G(effective) is not the simple sum of G(unfolding) and G(hybridization), but instead the sum must be weighted by the species concentrations, which can only be obtained by solving the coupled equilibria for the given total strand concentrations. Note that a more precise model would also include competing equilibria for primer dimerization and mismatch hybridization.

or RNA that is folded, then the folding must be broken before the primer can bind (see Fig. 7). This provides an energetic barrier that slows down the kinetics of hybridization and also makes the equilibrium less favorable toward binding. This can result in the complete failure of a PCR or hybridization assay (a false-negative test). Thus, it is desirable to design primers to bind to regions of the target that are relatively free of secondary structure. DNA secondary structure can be predicted using the DNA-MFOLD server or using Visual-OMP as described in our review (2). Simply looking at a DNA secondary structure does not always obviously reveal the best places to bind a primer. The reason why the hybridization is more complex than expected is revealed by some reasoning. Primer binding to a target can be thought to occur in three steps: (1) the target partially unfolds, (2) the primer binds, and (3) the remainder of the target rearranges its folding to accomplish a minimum energy state. The energy required to unfold structure in step 1 can sometimes be partially compensated by the structural rearrangement energy from step 3 (as shown in Fig. 7). Such rearrangement energy will help the equilibrium to be more favorable toward hybridization, but the kinetics of hybridization will still be slower than what would occur in a comparable open- target site. Note that the bimolecular structure shown in Fig. 7 shows the tails of the target folded. Visual-OMP allows the prediction of such structures, which is accomplished by a novel bimolecular dynamic programming algorithm.

To compute the equilibrium binding is also not obvious in multi-state reactions. We recommend solving the coupled equilibria for the concentrations of all the species. This is best done numerically as described in Subheading 2.4. The only PCR design software currently available that can solve the multi-state coupled equilibrium is Visual-OMP. Some recent work by Zuker (26) with partition functions is also applicable to the issue of multi-state equilibrium but to date has not been integrated into an automated PCR design software package. These considerations make the choice of the best target site non- obvious. Mismatch hybridization to an unstructured region can sometimes be more favorable than hybridization at a fully match site that is folded, thereby resulting in undesired false priming artifacts in PCR. Perhaps, it will come as a surprise to some that secondary structure in the primer is beneficial for specificity but harmful to binding kinetics and equilibrium. A practical way to overcome the complexity problem is to simply simulate the net binding charac- teristics of all oligos of a given length along the target—this is called “oligo walking.” Oligo walking is automatically done in the PCR design module of Visual-OMP and is also available in the RNA-STRUCTURE software from David Matthews and Douglas Turner (27,28).