Myth 7: Multiplex PCR Can Succeed by Optimization of Individual PCRs

Not too many people believe this myth, and yet their actions are somewhat irrational as they proceed to immediately use that approach to try to experimentally optimize a multiplex PCR. It is true that well-designed single-target PCRs are useful for developing a multiplex reaction, but for a variety of reasons, this approach alone is too simplistic. The most common experimental approach to optimizing a multiplex PCR design is shown in Fig. 11, as suggested by Henegariu et al. (30). This is a laborious procedure that has a high incidence of failure even after extensive experimentation. The core of this approach is to first optimize the single-target amplifications and then to iteratively combine primer sets to determine which primer sets are incompatible and also to try to adjust the thermocycling or buffer conditions. With such an approach, the optimization of a 10-plex PCR typically takes a PhD level scientist 3–6 months (or more), with a significant chance of failure anyway.

Why does the experimental approach fail? The answer is that there are simply too many variables (i.e., many different candidate primers and targets) in the system and that the variables interact with each other in non-intuitive ways. Anyone who has actually gone through this experimental exercise will attest to the exasperation and disappointment that occurs when 7 of 10 of the amplicons are being made efficiently (after much work) only to have some of them mysteriously fail when an eighth set of primers is added. The approach of trying to adjust the thermocycling or buffer conditions is also doomed to failure because the changes affect all the components of the system in 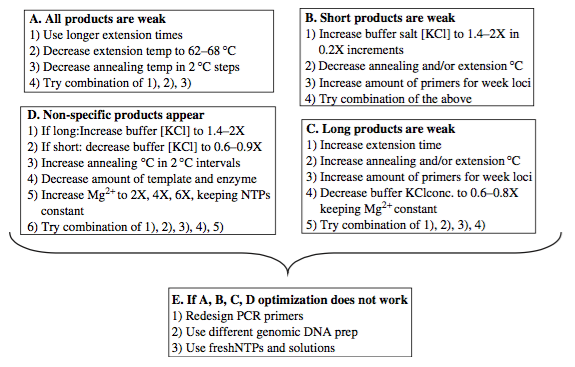 different ways. For example, increasing the annealing temperature might be a fine way to minimize primer dimer artifacts (which can be a big problem in multiplex PCR), but then some of the weaker primers start to bind inefficiently. Subsequent redesign of those weak primers might then make them interact with another component of the reaction to form mishybridized products or new primer dimers, or cause that amplicon to take over the multiplex reaction.

The mystery could have been prevented (or at least minimized) with the use of a proper software tool. First, proper design if the single-target PCRs leads to improved success when used in multiplex. Second, software can try millions of combinations with much more complete models of the individual components (as described throughout this chapter) and use more complete modeling of the interactions within the whole system, whereas a human can only try a few variables before getting exhausted.